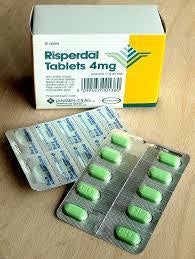 The antipsychotic medication, Risperdal (risperidone), which is manufactured by Johnson & Johnson's Janssen Pharmaceutical unit, has been blamed for young boys developing gynecomastia, more commonly known as male breasts. Lawsuits continue to mount and allege that the drug maker did not provide sufficient warnings about this serious, potential side effect and also allege that the drug was not appropriately researched before being released to the market.

Risperdal is an atypical antipsychotic that received U.S. Food and Drug Administration (FDA) approval in 1993 to treat schizophrenia and bipolar disorder in adults and adolescents. The drug was also approved to treat irritability in children who are 5-to-16 years of age and diagnosed with autistic disorder. In some cases, Risperdal is prescribed off-label to treat attention deficit with hyperactivity disorder (ADHD).

Atypical antipsychotics, including Risperdal, target the brain's serotonin and dopamine receptors. Risperdal has been associated with a number of serious side effects, including gynecomastia, diabetes, and movement disorders, and may also increase the body's prolactin levels. Prolactin is a hormone that stimulates female breast development and is associated with breast development in girls undergoing puberty, as well as the breast development seen in lactating mothers. When young boys experience increased prolactin levels, they may develop male breasts that also may cause pain and nipples that discharge.

Studies have tied Risperdal with breast development in young males. In fact, a study published in 2006 in theJournal of Clinical Psychopharmacology, indicated that some children who took Risperdal developed increased prolactin levels. According to the research, risperidone, "administered to adolescents at doses commonly used for the treatment of psychotic symptoms can strongly increase prolactin levels, with clinical consequences such as gynecomastia." The research also revealed that long-term Risperdal effects are not well-documented concerning growth and puberty delays and should be prescribed with caution to children and adolescents.

Another study, published in the Journal of Child and Adolescent Psychopharmacology in 2009 revealed that the increased prolactin levels seen in Risperdal patients might persist for about two years.

Gynecomastia is much more than a source of shame for victims of Risperdal gynecomastia. The growing of male breasts has significant effects on physical health, as well. In clinical trials that involved 1,885 children who had been prescribed Risperdal, 43 were diagnosed with abnormal breast tissue growth.

The symptoms of Risperdal gynecomastia are not reversible, even if the medication is stopped, and may include:

Adverse side effects associated with Risperdal may happen at any time once treatment starts. In one case, for example, a patient developed gynecomastia after taking the drug for five years. In other cases, symptoms may occur earlier. Because there is no reversal of symptoms, even if the medication is stopped and following puberty, mastectomy or liposuction may be required to remove male breasts. Mastectomy may be needed when the breasts are larger and liposuction is, or would be, ineffective. Mastectomy, "the surgical removal of breasts tissue and fat," is a significant and risky surgery, as is liposuction. There are no medications that reverse gynecomastia.

There is an ongoing trend in which children are being treated with strong antipsychotic drugs, including Risperdal. A recent Consumer Reports article revealed that the increase in Risperdal prescriptions, as well as other medications, does not mean that there is an increase in schizophrenia and bipolar disorder diagnoses. It seems that economically disadvantaged and minority children who are as young as two years of age are being treated with Risperdal.

While use of Risperdal has increased and broadened, and related injury reports and litigation has mounted, as well, some health industry organizations have worked to correct the situation. For example, the American Psychiatric Association announced that Risperdal and other medications should not be prescribed for off-label uses – uses not approved by the FDA. "What's not known about the long-term effects is very troubling," an assistant professor at Tufts University School of Medicine in Boston also said, adding that, "The younger you go, the more you can affect the developing brain."

There are no exact numbers indicating how many men and boys have developed gynecomastia due to their having taken Risperdal; however, lawsuits continue to mount over the matter. Of the pending Risperdal lawsuits brought against Janssen Pharmaceuticals, at least 130 allege that Risperdal led to male teenagers developing breasts. In fact, one teenaged boy alleged that he developed male breasts after taking Risperdal for five years from when he was nine years of age. He also alleged that his gynecomastia caused him psychological trauma and his having to undergo surgery to have the breast tissue removed. In this case, Johnson & Johnson agreed to a settlement on the first day of trial, which was scheduled in mid-September 2012.

Many claims indicate that Risperdal gynecomastia victims allege having suffered shame in addition to enduring significant breast removal medical treatment. In many similar cases, physicians have recommended that teenage boys undergo surgery to have the breasts removed due to the potential for significant trauma. Some cases may be handled with liposuction; however, more severe cases, even moderate cases, typically require patients to undergo double mastectomy

Numerous Risperdal lawsuits have also been filed nationwide alleging that Johnson & Johnson and Janssen knew that Risperdal might lead to gynecomastia, but hid this information from the public. According to an October 12Bloomberg News report, the drug makers started to settle Risperdal lawsuits that had been consolidated in Pennsylvania State Court in Philadelphia. That same year, Johnson & Johnson reportedly agreed to settle charges with the federal government over the way in which it had marketed some of its medications, including Risperdal.

In a consolidated proceeding established in the Philadelphia Court of Common Pleas, court documents reveal that some 275 claims have been filed on behalf of men and young boys who allege they suffer from Risperdal gynecomastia. The lawsuits also allege that Risperdal was inappropriately promoted off-label.

In later 2013, The Wall Street Journal reported that the drug maker was planning on removing itself from a $212 million deal when the U.S. Department of Justice sought to have Johnson & Johnson admit it downplayed Risperdal-related side effects, including its alleged potential to raise prolactin levels in children. The government also accused the drug maker of illegally promoting Risperdal to children before the drug was approved for any pediatric uses. The Wall Street Journal reported that Johnson & Johnson argued that the admission the government wanted would damage its position in lawsuits alleging Risperdal gynecomastia.

Ultimately, the drug maker agreed to settlements exceeding $2.2 billion to resolve federal charges that it improperly marketed a number of drugs, including Risperdal. That deal was part of a settlement with the U.S. Department of Justice under which Johnson & Johnson agreed to plead guilty to a criminal misdemeanor charge over the way in which the drug maker illegally marketed Risperdal for the treatment of elderly dementia patients. Johnson & Johnson and its Janssen Pharmaceuticals unit did not admit to any wrongdoing in settling the civil charges brought by the Justice Department over allegations the drug makers improperly marketed Risperdal for use in children. The settlement included criminal fines, as well as forfeiture of $485 million and $1.72 billion in civil penalties. The settlement also resolves similar accusations brought by 45 states, according to a New York Times report . The civil charges allege that Risperdal was marketed for use in children before the drug received agency approval for pediatric treatment in 2006 and that Johnson & Johnson knew that Risperdal posed significant risks to pediatric patients, including gynecomastia. When the settlement was announced, U.S. Attorney General Eric Holder said that J&J had "recklessly put at risk the health of some of the most vulnerable members of our society, including young children, the elderly, and the disabled."

Johnson & Johnson also agreed to settle Risperdal lawsuits that were brought over claims that the antipsychotic medication increased breast-tissue growth in boys, according to a Bloomberg News report. The settlement terms were not released, but five cases of more than 500 were planned to be tried in Philadelphia, Pennsylvania, according to Janssen spokeswoman, Teresa Mueller, in an emailed statement; the drug maker denies any wrongdoing. The five Risperdal lawsuit settlements involved cases that accuse Johnson & Johnson and Janssen of injuries tied to Risperdal use, the drug makers indicated in a regulatory filing.

More than 100 Risperdal lawsuits allege gynecomastia (male breast growth) injuries, according to the Bloomberg News report. Bloomberg News was told by one of the patient's attorneys that Johnson & Johnson hid Risperdal's ties to increased hormone levels that lead to breast development in males and that the drug maker trained its sales staff to minimize adverse event information when speaking to physicians. For its part, the drug maker's attorneys argue that the boy's breast development was a normal aspect of puberty, denying that the drug maker illegally marketed Risperdal.

Dozens of lawsuits alleging gynecomastia injuries following use of Risperdal are pending in courts nationwide. Of these, 77 plaintiffs in some of these claims, which had been filed in a consolidated litigation underway in Pennsylvania State Court in Philadelphia, motioned the Court seeking to have an agreement enforced which, they state, was previously reached with the drug maker. J&J threatened to walk away from the Risperdal lawsuit settlements agreement, according to the motion, if the agreement was not expanded to include claims filed against specific third-party defendants. The plaintiffs allege that Johnson & Johnson had known from the start that the settlement would not extend to these defendants.

In October of 2019, a jury in Philadelphia County, Pennsylvania returned a verdict of $8 billion, nearly all of which was punitive damages intended to punish Janssen for downplaying the risk of gyneomastia. The case involved a young man who took Risperdal starting in 2003 at the age of 9 to treat symptoms of autism. At that time, the Risperdal label did not include any warning with respect to gyneomastia. The jury found that Johnson & Johnson was aware that taking Risperdal created an increased risk that boys would develop breasts yet is failed to warn of this risk and improperly marketed the drug for the treatment of mental health disorders in young boys. In doing so, the jury found that it acted deliberately and maliciously. While over $7 billion in punitive damages may seem astronomical, it has to be viewed in the context of Johnson & Johnson's earnings. In 2018, Johnson & Johnson had revenues of nearly $82 billion. The only way to deter a corporation with such huge revenues from engaging in harmful conduct is with an equally huge punitive damages verdict. And this is not the only circumstance in which Johnson & Johnson is accused of such shameful conduct. It is also defending thousands of lawsuits alleging that its talc powder causes ovarian cancer.

If you or your child used brand named Risperdal prior to 2007, you are under 21 years of age and were diagnosed with gynecomastia, you may want to consider filing a lawsuit to seek compensation for any alleged injuries, medical care, and lost wages, among other losses.

To learn more, contact our Risperdal lawyers today. Sullivan & Brill, LLP offers free consultations and, if we cannot get a recovery for you, you do not owe us any attorney fees.