If you or someone you care about has suffered a heart attack while undergoing dialysis treatment or within 24 hours after dialysis treatment, you should speak with our lawyers at Sullivan & Brill, LLP who is knowledge about GranuFlo and NaturalLyte dialysis products and the lawsuits that have been filed against Fresenius Medical Care. Your initial consultation is complimentary, and if your case is accepted, you will not be required to pay any fees or expenses unless a recovery is obtained on your behalf. 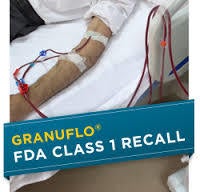 Fresenius Medical Care is the manufacturer and seller of GranuFlo and NaturaLyte dialysis products, which have been associated with serious cardiac arrest and cardiac death reactions. The U.S. Food and Drug Administration (FDA) deemed a Fresenius Medical Care warning a Class I recall. A Class I recall is the agency's most serious designation and indicates that the recalled product may cause serious adverse health consequences, including death.

Despite the Class I designation, the FDA did not suggest changes to the way in which GranuFlo is produced and its clearance to market remains in place.

GranuFlo and NaturaLyte Tied to Serious Cardiac Reactions and Death

Competitor products provide similar functions to the Fresenius products; however, GranuFlo and NaturaLyte are made with more of one particular ingredient that the body converts into bicarbonate. This increase places patients at risk for serious cardiac injury and death when not appropriately prescribed.

The FDA indicated that increased bicarbonate levels in the blood may be a contributing factor for a metabolic condition known as metabolic alkalosis, which is a key risk factor for the following adverse health conditions:

If these conditions are not appropriately treated, significant reactions, including sudden cardiopulmonary arrest and death may occur.

Evidence indicates that Fresenius warned its own physicians about the issues with GranuFlo and its association with sudden cardiac arrest, but did not issue a warning outside of its clinics, despite the fact that the drugs were used in dialysis treatments outside of Fresenius facilities. Finally, after an internal Fresenius memo was released to the FDA, Fresenius issued a warning, according to a The New York Times report.

During hemodialysis, the dialysis machine filters waste, extra salt, and water from the blood of people whose kidneys are no longer functioning well enough to manage this process. One critical part of the dialysis process involves neutralizing acid in the blood, which is accomplished by supplying the patient with bicarbonate, an alkaline substance. According to reports, physicians who did not account for the additional bicarbonate in GranuFlo and NaturaLyte when considering separately administered bicarbonate were placing patients at risk for the effects of excessive bicarbonate, which has been tied to cardiac issues.

An internal investigation conducted by Fresenius reportedly revealed that increased serum bicarbonate levels increase cardiac arrest risk. According to a 2010 internal Fresenius memo, 941 patients who had been treated at Fresenius-owned dialysis clinics underwent cardiac arrest; a data review revealed that these patients' risk of cardiac arrest was increased by six-fold if they experienced an increased pre-dialysis bicarbonate level. Despite these findings, the drugs were aggressively marketed and, according to GranuFlo and NaturaLyte lawsuits, the drugs were commonly combined with other products for pricing discounts.

The Fresenius memo warned that the risk of cardiac originated with doctors not prescribing GranuFlo and NaturaLyte properly and that this matter should be "addressed urgently." The memo was circulated to Fresenius' own dialysis centers in November 2011; however, reports indicate that Fresenius never advised customer clinics about possible cardiac issues even though more than 100,000 dialysis patients were receiving GranuFlo and NaturaLyte at non-Fresenius facilities.

It took until March 2012, after the memo was provided anonymously to the FDA, that the information was released and, even then, according to allegations, the information provided to customers and clinics lacked clarity, as well as the details and urgency indicated in Fresenius' original memo that was released internally. What's more, some allege that the external memo only contained one of ten medical references that were indicated in the internal Fresenius memo and that the external memo did not mention the populations who were at greatest risk.

Since then, the FDA has implemented a probe to determine if Fresenius broke any federal laws when it neglected to warn customers of the potentially dangerous cardiac risk, according to a report issued by The New York Times.

All federally filed GranuFlo lawsuits were consolidated on March 29, 2013 in the U.S. Federal Court for the District of Massachusetts. This type of consolidation enables a coordinated pre-trial and discovery process. As of February 2014, 515 lawsuits were pending against Fresenius in the GranuFlo multidistrict litigation (MDL).

Lawsuits also accuse Fresenius of intentionally concealing potentially deadly problems with its now-recalled GranuFlo and NaturaLyte products and that patients' who were treated with the Fresenius products tested with increased acetone concentrations. This in turn led to abnormally high blood bicarbonate levels, which, then, led to fatal heart problems and strokes.

GranuFlo and NaturaLyte lawsuits also allege that Fresenius neglected to sufficiently warn physicians and other healthcare professionals who work in the field of hemodialysis about the potentially deadly risks tied to GranuFlo and NaturaLyte. According to the lawsuits, it is Fresenius' responsibility to appropriately inform and train medical professionals involved in dialysis treatment and to ensure that these professionals are clear on the proper use of its dialysis products in a safe, efficacious manner.

One lawsuit involved a patient who underwent dialysis treatment with GranuFlo and / or NaturaLyte and died following treatment. The lawsuit alleges that the patient was unaware of the risks associated with the medications and, through meticulous attempts, would not be able to discover information on risks, serious injuries, or death tied to GranuFlo and NaturaLyte. The lawsuit also alleged that the drugs, despite having been properly and reasonably used, caused the patient to suffer a fatal cardiovascular event shortly after use. The lawsuit also indicated that GranuFlo and NaturaLyte labeling, packing, and instructions did not provide adequate instructions or warnings about the way in which to use the GranuFlo and NaturaLyte dialysis concentrates and that Fresenius neglected to include these warnings despite its complete knowledge of the drugs' risks.

Lawsuits brought against Fresenius also allege that physicians, treating clinicians, and nurses were unaware of the so-called increased "buffer level" tied to GranuFlo and NaturaLyte products. This buffer level could potentially lead to a significant increase in bicarbonate levels, placing patients at serious risk for heart attack, cardiopulmonary arrest, and sudden cardiac death.

In 2013, the U.S. Food and Drug Administration (FDA) issued a third warning to Fresenius to improve procedures at its sites. The latest issue concerned Fresenius' Puerto Rico plant where blood bags are manufactured. Also mentioned was the way in which complaints and labeling are handled.

Prior to the 2013 warning, the FDA issued a warning letter involving an inspection of a Fresenius cancer drug facility located in India. Prior to that, a Fresenius subsidiary, Fresenius Medical Care, considered the largest dialysis company in the world, was told by the FDA to improve the way in which it sterilized its dialyzers for filtering patients' blood. That same year, the India plant recalled some of its magnesium sulphate and benztropine mesylate injections in the United States over the potential for glass particles in the products' vials.

A Fresenius Medical Care North America dialysis center shut down previously over infection-related deaths and hospitalizations. And, a 2012 inspection found that a center, among other issues, did not meet a number of infection control standards, including that the facility neglected to ensure that "patient care staff wore gloves and washed hands appropriately during patient care," according to the inspection conducted by the state health department for the firm's participation in the Medicaid and Medicare programs. The deficiencies cited, the report indicated, "had the potential to affect all patients served by the facility." In a two-year period involving these health department surveys, 11 Fresenius dialysis centers in Alabama, alone, were cited with deficiencies.

Considering a GranuFlo or NaturaLyte lawsuit?

If you, or someone you love, experienced complications due to dialysis treatment in which GranuFlo or NaturaLyte were used, you may want to consider filing a lawsuit to seek compensation for any alleged injuries, pain and suffering, mental anguish, medical care, lost wages and loss of earning capacity, and other losses.